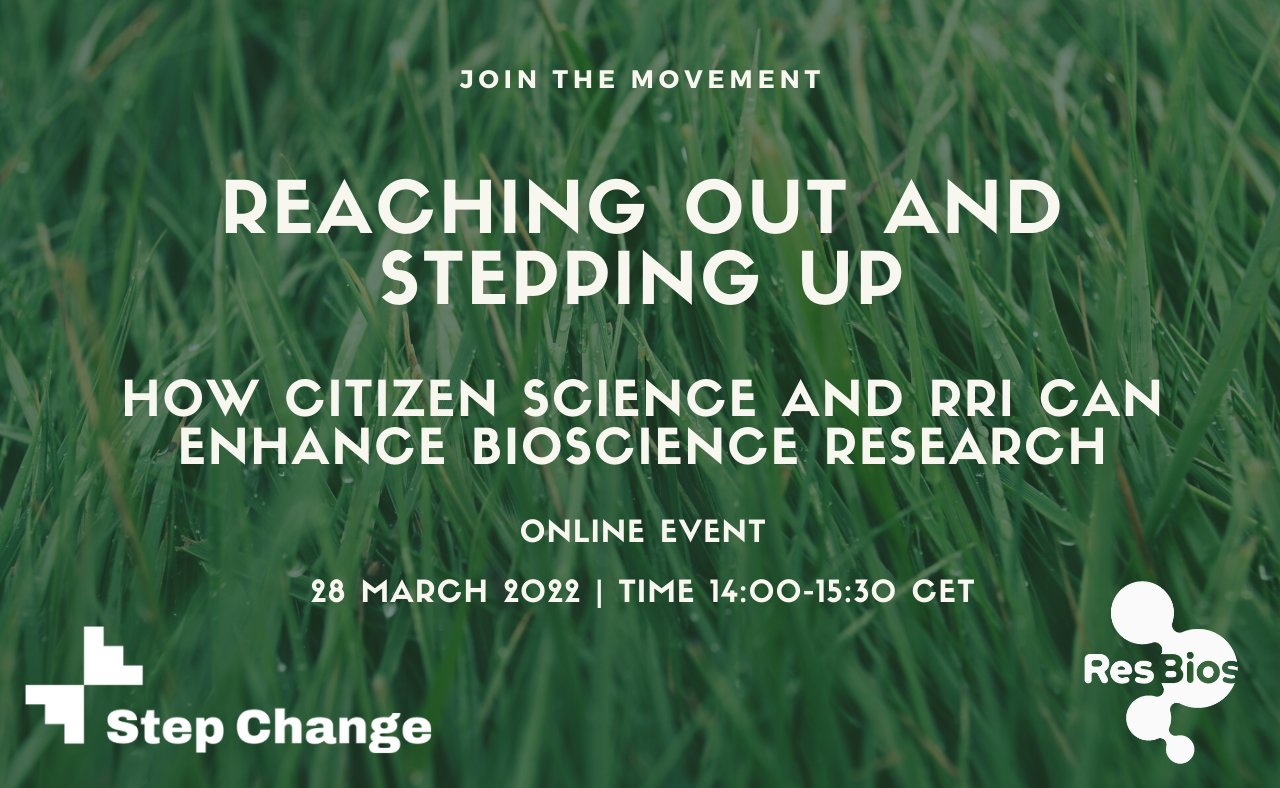 RRI and Citizen Science, how these approaches overlap

Summary of the online event “Reaching out and stepping up, how Citizen Science and RRI can enhance bioscience research”, jointly organised by ResBios and Step Change in March 2022

The event kicked-off hosting a presentation by Dr. phil. René von Schomberg, the Kate Hamburger Kolleg, who launched the conversation explaining what the key elements of RRI are and why those are relevant for the ResBios and Step Change projects. He explained that RRI can be intended as a framework responding to current deficits of the R&I system, and that today we don’t have governance mechanisms thoroughly considering the outcomes of science and technology, which is a major shortcoming. Science, technology and innovation policies are not sufficiently aligned with shared public values. But which are the socially desirable objectives of science? Von Schomberg explained that RRI’s goal is precisely to organise a system in a way that it becomes a driver for socially desirable innovations. He also added that anticipatory governance mechanisms giving direction to innovation should be implemented. He then moved forward, stating that the publish or perish logic, which dominates research today, is paradoxically contributing to making the system somehow less productive, since this logic does not lead to socially desirable outcomes. If it’s important to change the incentive system of science, it’s also relevant to switch from a competitive approach to a collaborative one. Von Schomberg mentioned then Open Science, policy priority for the European Commission, and the relevance of co-design and co-creation of research in synergy with citizens. Co-defining research agendas is very important, he stated, since citizens have to be seen as agents of change. 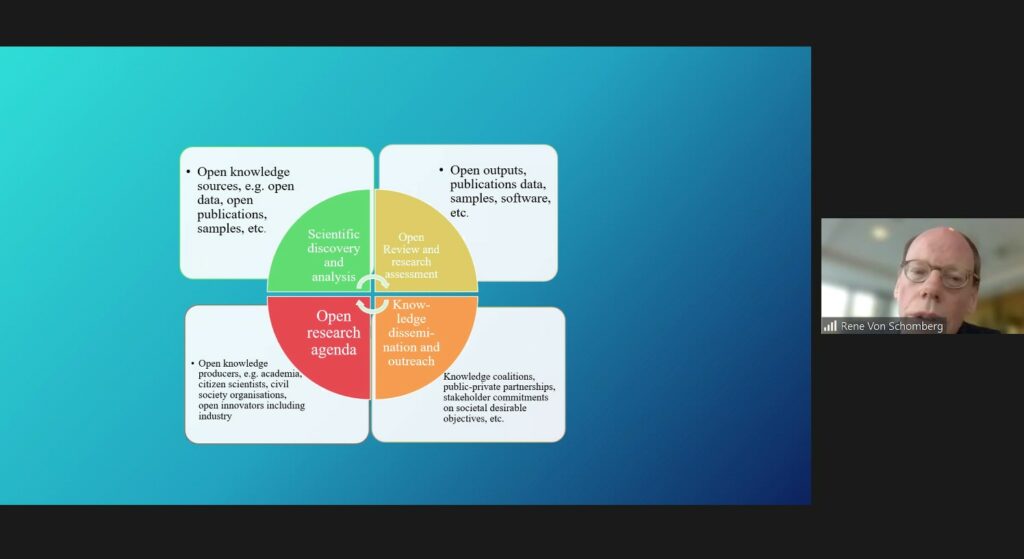 The conversation moved forward with Daniele Mezzana, Researcher at Knowledge & Innovation, who introduced ResBios and its objectives, explaining that the goal of the project is challenging the behaviour of academics while socialising research. He stated that the project aims to root RRI practices in four research organisations in the field of biosciences, namely through 15 grounding actions involving stakeholders from the quadruple helix. Mezzana explained that the relationship between science and society has become increasingly complex, especially in terms of trust, and that RRI is one of the possible ways to somehow exert control on this, trigger a sustainable institutional change, and favouring a stronger science. He then presented a few examples stemming from the implementation of the project.

It was then the turn of Prof Elena Buzan, University of Primorska, who introduced Step Change and explained which the main goals of the project are. She explained that Step Change aims to open science to society, and more in general to people with different backgrounds, outside from the exclusive club of science. She explained her vision of Citizen Science as Responsible Citizen Science, and claimed that it’s paramount to involve citizens in the identification of research priorities as well as in the setting up of methods. She added that citizens have to be included not only as data collectors, since they are meaningful actors who can, if adequately trained, participate in all the stages of the research process. After having touched upon a few challenges, such as validation of data and involvement of stakeholders, she concluded stating that there is certainly a bridge between citizen science and RRI, and that looking at the 10 principles of citizen science, objectives and outcomes of RRI considerably overlap. 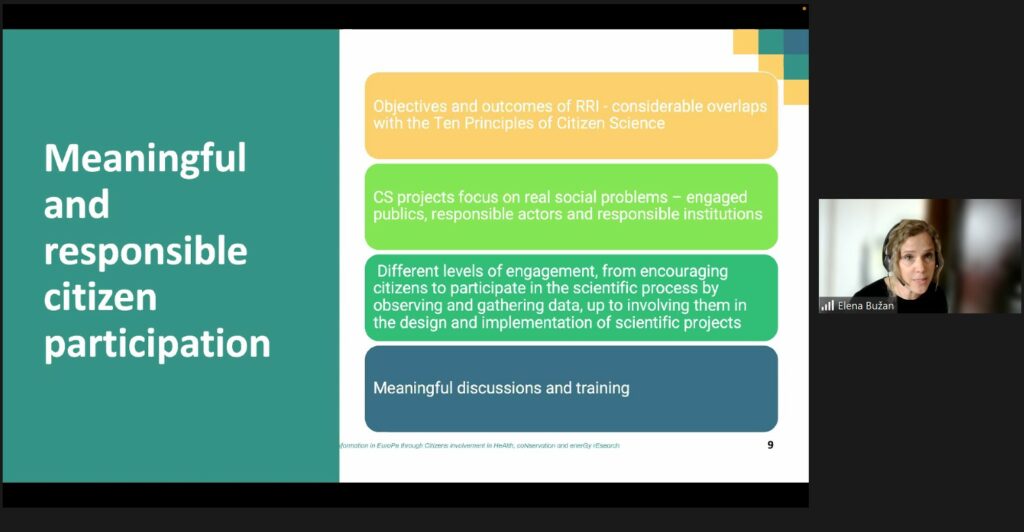 The discussion moved on with Dr. Carolina Doran, founder of the Berlin Soapbox Science team and representative of the European Citizen Science Association. She explained that she co-created her presentation with the community of citizen science practitioners. In fact, she reached out to the community to gather information, and learn about main challenges encountered by practitioners implementing citizen science projects in the field of bioscience. Amongst the main challenges mentioned, lack of funding and sustainability of projects in the long term, recruitment, management of participants’ expectations, retaining for long data collection, engagement of high-level decision makers, need of robust scientific data, inclusiveness, and knowledge sharing. As for the lessons learned, she cited the relevance of designing impactful recruitment campaigns, as well as the importance of training local community members, who can carry on expert tasks if provided with guidance. Doran concluded mentioning inclusive terminology, financial facilitation in the global south, and knowledge sharing within the community.

Restoring the trust between science and society, listening to the inputs of citizens to increase the quality of research and innovation, while taking advantage of different expertises available on the field. Among the main takeaways of the event, the need for practitioners working at the interface between science and society to provide visibility to success stories, which should be well communicated to the top level. But also the importance of soliciting decision makers, to show them that practices that could inspire policies are being implemented at the local level. There is political momentum to embrace the inputs of citizens throughout policies, including research and innovation ones, and practitioners working in the fields of RRI and Citizen Science should make the most of it.

The full recording of the webinar is available below.

To achieve sustainable institutional changes, ResBios is embedding Responsible Research and Innovation (RRI) practices within four universities and research institutions in the field of Biosciences in four European countries, through the implementation of RRI Grounding Actions. The project is focused on the biosciences sector which is one of the crossroads in the relations between science and society. It builds upon the EU project StarBios2, which ran between 2016 and 2020, setting the scene for transformative practices and tested interventions aligned with these new science policy frameworks.

Step Change, launched in March 2021, is implementing five Citizen Science Initiatives (CSIs) in the fields of health, energy and environment. The CSIs tackle the issues of wildlife conservation in Slovenia, non-alcoholic fatty liver disease in the UK, energy communities in Germany, infectious disease outbreak preparedness in Italy, and off-grid renewable energy in agriculture in Uganda. To support the spread of citizen science, the project will design a Citizen Science Navigator, a web-based tool that will collect theoretical and practical insights about different citizen science applications. The aim of the project is to ensure that research institutes make the most of what citizen science has to offer, whilst also identifying, analysing, and limiting the associated risks.